D.H. Lawrence was fascinated by this absorbing area and wrote: “The Greeks sought to make an impression, and Gothic still more seeks to impress the mind.
The Etruscans, no. 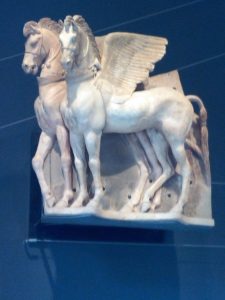 The things they did, in their easy centuries, are as natural and as easy as breathing. They leave the breast breathing freely and pleasantly, with a certain fullness of life. Even the tombs. And that is the true Etruscan quality: ease, naturalness, and an abundance of life, no need to force the mind or the soul in any direction. Tarquinia – The Winged Horses And death, to the Etruscan, was a pleasant continuance of life, with jewels and wine and flutes playing for the dance. It was neither an ecstasy of bliss, a heaven, nor a purgatory of torment. It was just a natural continuance of the fullness of life. Everything was in terms of life, of living. The sea is that vast primordial creature that has a soul also, whose inwardness is womb of all things, out of which all things emerged, and into which they are devoured back.” D.H. Lawrence – Etruscan Places. 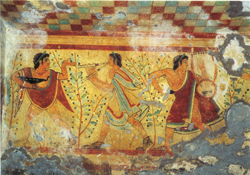 This book of Lawrence may offer a new approach or stimulus to widen the knowledge of the Etruscans, visiting the archaeological sites, tombs and museums between Lazio and Tuscany, essential to the understanding and appreciation of the history and art of the Etruscan civilisation.

Tarquinia is well know all over the world because of the extraordinary necropolis, where exquisite frescoes on the walls of the tombs, tell the story of Etruscan life, their customs, amusements and emotions.
Tarquina – The tomb of the Leopards No less interesting is Tarquinia’s National Museum, which houses a rich collection of pottery, beautiful black “buccheri”, jewellery and Greek ceramics. The famous group of “The winged horses” clearly portrays the vigorous plasticity and technical skill of the Etruscan artists.

Vulci is a solitary setting, immersed in an unreal silence.

“The castle stands on the verge of a deep ravine which is here spanned by a narrow bridge, fenced in with parapets so tall as to block all view……with the Fiora fretting and foaming at a vast depth beneath.” G. Dennis -The Cities and Cemeteries of 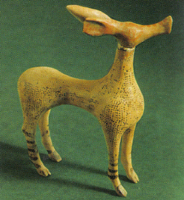 Etruria. Vulci – The Abbey Bridge and the Castle Inside the castle there is an interesting museum 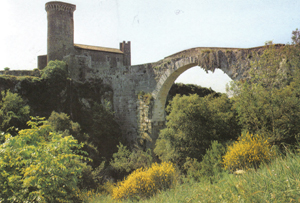 containing objects found in the area of this city, which was built on a steep
cliff of tufa (volcanic rock) that flanks the Fiora river.

“There is a queer stillness and a curious peaceful repose about the Etruscan places….and a feeling that it was good for one’s soul to be there.” Vulci – Deer-shaped vase for perfume

The profound intuition of Lawrence well describes the archaic message coming from the glamorous
mystery of the Etruscan civilisation.