Viterbo, the city whose name is derived from the Latin “Vetus Urbs”, became, in 1192, an episcopate and was the residence of the Popes around the middle of the XIII century. This period was historically most significant as many important monuments and palaces were built in the city. Viterbo, surrounded by well-preserved walls, deserves a dedicated visit in order to appreciate the wonderful medieval quarter where houses, churches and fountains are built of “peperino” – the grey stone having the colour of pepper, this also being used by the Etruscans for sculpting their sarcophagi. 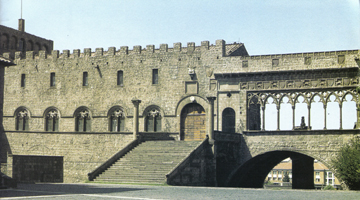 The visit to the city commences at the “Palazzo dei Priori”, seat of the local municipal administration and continues on through the narrow streets passing small squares and various gothic fountains arriving at the famous Papal Palace, built around the 13th century and the seat of various conclaves. In 1271, the people of Viterbo, attempting to force the Cardinals to agree to the election of a new Pope, locked them inside the Palace. (The word “conclave” is derived from the Latin “clausi cum clave” which means “locked by key”). Various and beautiful are the churches, built over several centuries, the interior of Cathedral being particularly evocative.

Civita di Bagnoregio, “the Dying City”, is almost unreal
, being perched on a rock rising above the surrounding valley. The valley is wrinkled by “calanchi”, furrows ploughed by the rain on the friable slopes over many centuries. The valley is reminiscent of a moonscape both in colour and texture. 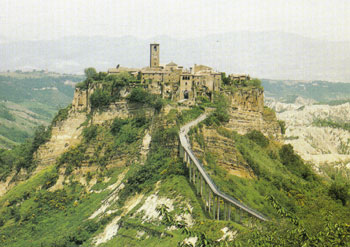 Over many centuries, weathering and the effects of earthquakes have gradually eroded the sides of the rock and houses collapse every few years. The medieval city was built along the Etruscan system of arranging streets to run north/south or east/west so forming right angles. The city was located at the intersection of the “Cardo” and “Decumanus” paths. Everything here has a quaint and antique flavour: small streets, arches and squares decorated with flowers by the few remaining inhabitants. Access from the road to the hamlet is gained by a concrete walkway that provides a splendid view of the city.

Tuscania is famous throughout the world for the Romanesque churches that are treasures of architecture and for history of art. The churches built outside the
well-preserved medieval walls of yellow “tufa” or volcanic rock, have similar facades to one another and have elegant interior decorations. 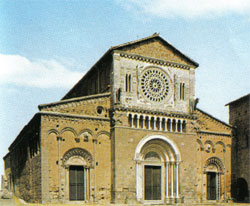 In spite of the tremendous earthquake of 1971, signs of which are still visible, the city attracts many tourists who fall in love with the charming surrounding landscape, where sheep graze on grass growing between the thousands of Etruscan tombs. Pottery, bronzes and sarcophagi from these tombs are displayed in the archaeological museum in the convent of S. Maria del Riposo.